Time to think about Time

For many years my working life was dominated by The Pips!

Any idea what I'm talking about?

Well it's that series of 'pips' ... five short and one long tone ... that are broadcast by many BBC Radio stations at the top of each hour.

Why am I talking about this today? Well, it was on February 5th 1924 that the BBC Pips ... the Greenwich Time Signal .. was first broadcast. 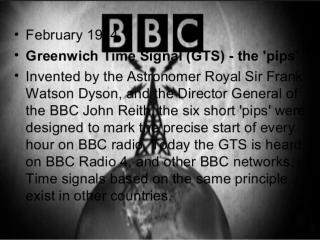 As a radio presenter, for many years I had to ensure I met the 'Pips' cleanly at the top of the hour. No talking over them, no crashing into them. They were sacrosanct.  It could be a quite a pressure but you got used to it.

Only a few BBC radio stations continue to run the Greenwich Time Signal now to give us the precise start to the hour.

Some might think that's a shame, because those pips were a way we could check that our watches and clocks were spot on. These days digital time pieces are so accurate we perhaps don't need the Greenwich Time Signal to keep us on track of time.

Back in 1924, the idea for the Pips came from the Astronomer Royal of the time, Sir Frank Watson Dyson, and the head of the BBC, John Reith.

I'm not going to to go into the technical details of this because I don't know them and it might be rather boring. If you're so inclined, there are plenty of websites which can give you that information.

But what I've gleaned is that the Pips were originally controlled by two mechanical clocks in the Royal Greenwich Observatory which had electrical contacts attached to their pendula. These sent a signal each second to the BBC, which converted them to generate the distinctive beeps of the pips. By the way, just in case one clock failed, two clocks were always used and years later an electronic clock was deployed.

Until 1972 the pips were of equal length. Confusion reigned. Which was the final pip? How did we know it was actually the top of the hour? That was when the last pip was extended. Five short pips, followed by one long.

In 1990 the BBC started to generate the pips themselves via what I read is an atomic clock. Wow.

The Pips were at one point featured on BBC TV but that was discontinued in the 1960s, yet the Greenwich Time Signal seems to remain synonymous with the nation that is Great Britain. It was the first sound heard in the handover to the London 2012 Olympics during the Beijing 2008 Olympics closing ceremony. To celebrate the 90th birthday of the pips on 5 February 2014, the Today programme on BBC Radio 4 broadcast a sequence that included a re-working of the Happy Birthday melody using the GTS as its base sound.

These days, if you want the reassuring sound of the Greenwich Time Signal, then the best place to go is BBC Radio 4, which uses them at the top of each hour. Sometimes when I can't sleep and I'm listening to the BBC World Service radio I also hear them as well. There are similar time signals used by radio stations in lots of other countries, but I guess the BBC Pips are the most famous.

But what you may not know is that the GTS is available not just on the hour but also on the quarter past, the half past and the quarter to the hour. When you're presenting in a radio studio there's a GTS stream you can fade up on your desk to give you the Pips, and if after the top of the hour you forget to fade that stream down, it'll automatically pop up at those times as well. I have to say, that only happened to me just the once!

The thing about the Greenwich Time Signal, and those Pips, is that they remind us that time is fleeting. Time is passing. Time is short.

Perhaps we don't like being reminded about that. I know I don't.

But if there's something we need to get done ... maybe we need to be just get on and do it, before we run out of time. And although there may be lots of things that we need to do just because we need to do them, it's also important to use our time wisely.

And on that point ... there are masses of quotes about time on the internet but there's one which I'll leave with you today ...

“Always make time for things that make you feel happy to be alive.”