Have you had your vaccination yet?

If you're a person of my age, that's a question you might be hearing or reading quite a lot recently.

My age group hasn't yet been invited to have the Covid19 jab and I'm not vulnerable and I don't have underlying health conditions, so I've not been called early to our local vaccination centre at Fort Regent overlooking St Helier in Jersey.

Here we're getting on famously with the rollout of the vaccination against this awful virus, and I expect to have my jab probably sometime in the next six weeks. Although we all know that it won't cure COVID, it will protect us against becoming ill and hopefully, prevent more deaths.

The world is pinning its hopes on the various forms of the coronavirus vaccines which have been developed over the past year, to ensure we can go back to a sense of 'normal' sometime in the future. It won't kill off the virus because most experts predict it is here to stay, and it won't mean those of us who are vaccinated can just pick up our old lives without thought of risk in the future.

We will still need to wear masks, sanitise our hands, and I reckon social distancing is probably here to stay for a long time. And it's not just about us, it's about the rest of the world. Until the vaccine is shared with poorer nations and we all have an equal chance to benefit from it, the world will still be constantly on the brink of outbreaks, lockdown, restrictions.

These are extraordinary times but are they 'unprecedented'? I haven't the time to go into it in detail here, but in the course of human history there have been many 'unprecedented' times. Many epidemics and pandemics, many diseases which were the scourge of humanity not just for one year, or even decades, but for centuries.

On February 23rd 1954 a group of schoolchildren in Pennsylvania, USA, were the first group of people to receive injections of a new vaccine against a disease which has been around since pre-history.  However, it was in the 20th century that major outbreaks and epidemics began to emerge.

That disease is poliomyelitis - polio. Click on the word if you want to find out more about what it is ... but in short, it's an infectious disease which can in very rare situations cause death, in many has no effect and in others results in long term ill-health, paralysis and disability. It spreads from person to person through infected human faeces or saliva and it's been around for thousands of years. We know this because there are historic depictions of the disease and it's debilitating effects in ancient art.

However, it wasn't until the late 18th century that polio was recognised as a distinct condition. And the virus that causes it ...  the poliovirus ... wasn't identified until 1900.  Since the late 19th century there had been major outbreaks in Europe and the United States  and the race was on to try to identify this disease which in the 20th century became of the most worrying childhood diseases. You only have to look at old films and read history to see the way polio devastated lives. One of the images ingrained in my mind is that of the 'iron lung' - one of the symptoms and effects of polio is paralysis of the lungs, so these massive contraptions helped people to breathe.

Polio outbreaks blighted the first part of the 20th century. The most famous victim of a 1921 outbreak in America was future President Franklin Delano Roosevelt (FDR) who at the time was a young politician. The disease spread quickly, leaving his legs permanently paralyzed.

The rapidity with which the coronavirus vaccines have been developed has been astonishing. In the past, this took many years of research and tests and trials and in the case of polio it wasn't until the 1950s that the first vaccines were developed by various virologists and medical researchers.

In the late 1940s, President Roosevelt helped to create an organisation by the name of the March of Dimes, to find a way to defend against polio. They enlisted Dr. Jonas Salk, head of the Virus Research Lab at the University of Pittsburgh. Salk's research resulted in the discovery that polio had as many as 125 strains of three basic types, and that any effective vaccine needed to combat all three. Little by little, by growing samples of the polio virus and then deactivating  or “killing” them by adding a chemical called formalin, Salk gradually developed a vaccine which was able to immunize patients against polio without danger of infecting them.

And it was that vaccine developed by Jonas Salk that was used during that first mass anti-polio vaccination of the children from Arsenal Elementary School in Pittsburgh, Pennsylvania on this day back in 1954.

As with the current situation, there wasn't just one vaccine being developed. Soon after that first trial, another medical researcher, Albert Sabin developed an oral vaccine against polio ... and this is the treatment which is credited with having made the difference to the spread of polio in the second half of the 21st century.

This vaccine, which is a drop on a tongue, is the one most commonly used. I remember as a little girl queuing up in front of a school nurse and having a little drop of something bitter on my tongue. I didn't know then that this was protecting me from paralysis and disability.

Not everyone was so fortunate. I have a couple of friends who were infected as children and have ended up with physical disability - it usually affects the legs. I feel fortunate that I was born post 1954 when vaccines were available.

Yet the availability of a polio vaccine did not eradicate the disease immediately, or even within a half a century. Polio is still around today and it's mostly in parts of the world that are poor and disadvantaged, and where there is still conflict.

In recent decades there's been a real effort to try to eradicate the disease, led by the World Health Organisation. If polio is completely eliminated, it would be the second disease after smallpox to disappear from the face of the earth.

In 1988 when the WHO initiated the Global Polio Eradication Initiative, around 350,000 children a year across the world were being paralyzed by the polio virus. Back at the beginning of the 21st century the WHO was reporting that the number of cases diagnosed each year had been reduced by 99.9%.  In 2016 polio numbers had been driven down to 42 cases across the globe.

The multi-billion dollar global effort to eradicate polio is concentrated on children and among those who embraced this campaign more than 35 years ago are the members of Rotary International.

Their 'Purple for Polio' campaign involves giving the polio vaccine to children across the world.

Why 'purple'? It's because every time a child receives their life-saving polio drops on mass polio immunisation days, their little finger is painted with a purple dye ... this shows they've received their polio vaccine. 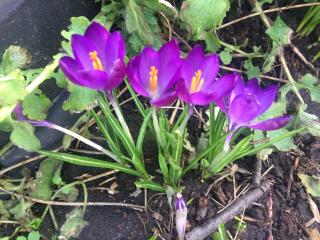 I've sort of got involved in the campaign over the past years. I've interviewed local Jersey Rotary members about it on the radio and I've been to celebrations, and I've bought and planted purple crocus corms which about this time of year are beginning to pop up across the island, and in my garden!

As the campaign has developed, it has come down to just a few countries where polio is still 'wild' ... including Pakistan and Afghanistan. There, poverty and conflict mean that clinicians often can't get into isolated rural communities, and sometimes prevailing cultural and even religious beliefs prevent the population embracing the treatments or even allowing the medical professions in to host those mass immunization days. It's slow progress in places like this.

Unfortunately during the coronavirus pandemic, where travel has been so restricted, cases of polio have started to rise again. Last year more than 200 cases of wild polio and around 600 cases of the vaccine-derived form of the disease were registered. According to news reports, most of the vaccine-derived strains of polio are in Afghanistan and Pakistan, but rogue strains of polio also emerged across sub-Saharan Africa, Yemen, Malaysia and the Philippines.

So there is still much to do! It might still take a while, but across the world there are those absolutely committed to seeing an end to this terrible disease which affects not just individuals and their futures, but families and whole communities.

We're not quite there yet, but the signs of the purple crocuses springing up in my garden, and across Jersey, are symbols of hope.

Posted by Cathy Le Feuvre at 08:00 AM in children, coronavirus, Covid19, Daily Thoughts, health, History, inspiration, Inventions, On This Day, One Day at a Time, Science, Weblogs, Writing | Permalink | Comments (0)