Cathy Home Page Archives Profile
Keep Looking Up
If this be loving ... then I love

Luckier than many parts of the world, we know.

Although during the Covid19 pandemic we've had some big numbers relative to our small population, and we have been locked down, with no family or friend visits, schools closed, businesses shut, cafes and restaurants and hotels not open, we are in a good place right now. Or at least, we're beginning to get there.

Numbers have fallen, people are being vaccinated and gradually our island is beginning to re-open.

And that's why non-essential shops re-opened a week ago and we are beginning to see a relaxation of the restrictions. Schools are already open, next week we expect hairdressers to open their doors again and soon we will be able to go to eat out, indoors, at a very safe distance and with all the safety measures in place.

We've been here before. We were doing well last autumn until some people decided to forget that we were in the middle of a pandemic and organised parties, and then coronavirus numbers shot up and restrictions had to be imposed again. Everything closed on Christmas Eve and it's only now we are beginning to see things easing.

So hopefully this time around people are being more cautious. 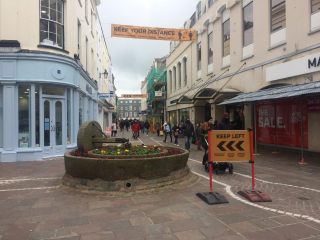 It's been more than a month since I ventured into 'Town' ... Jersey's capital of St Helier ... but I had to do so this week and that's when I experienced the Keep Left system in the main shopping area - King Street and Queen Street.

I was, I have to say, rather disappointed that not EVERYONE was keeping to the  left, and lots of people weren't wearing masks outside of the shops, but I didn't feel unsafe. Because I was keeping to the rules, wearing a mask and even had gloves on ... woollen ones because it was freezing!

But it got me thinking.

If we are living in community, we need to know what is acceptable and what is unacceptable behaviour. We can't all just do as we please because by doing that, although we might make life good for ourselves we risk making life unbearable for others.

Most societies have rules for living - laws - and mostly they are in place for the common good. Many of them are based not just on consensus but also have their basis in shared culture, history and even in religious/spiritual tenets.

Think of the Ten Commandments handed down to us from early Biblical times. The first few are about the relationship between humans and God, but most are about living in family (honour your father and mother) and living in community - you shall not steal, commit adultery, murder, lie against your neighbour or 'covet' what they have and you do not. It's just basic stuff, common sense really, but on this set of rules many laws of lands across the globe are based.

I understand there are some people who just don't like to keep to any rules. In political terms that's called 'anarchy' but most people who make a decision to pass on the rules set out by their community would not call themselves 'anarchists'. They might think of themselves as 'individuals' or 'free thinkers', but imagine if we were ALL just determined to do our own thing, regardless of others.

If there were no rules of the road, and we all just drove on any side of the track, there would be chaos, and probably some accidents. If there were no speed limits then people could just drive as fast as they wanted and risk killing people ... and yes, I am aware that speed limits are some of the rules that many many drivers tend to ignore! If we just took whatever we fancied from a shop without paying for it, knowing that we would not be changed with theft, what would that do to the economy?

Anyway, you get my drift.

Not that I want to live in a highly controlled society, but there is a need for some boundaries for our behaviour. And whether it's because you're a free thinker or just basically selfish and think only of yourself before others, one thing that this pandemic has taught us is that we DO all need to behave responsibly and follow the set out guidelines if we are to beat this virus.

SO - for all those in Jersey planning to do some Saturday shopping in Town.

Yes, I know I know ... lots of rules and some of us might be getting a bit bored of it all.

But if we don't do it, we could well find ourselves indoors, stuck at home, no seeing family members, with no retail therapy, or sports or eating out for much much longer.

Not sure about you but I'm happy to stick to the rules if it means that I won't have to do so forever and ever, until the end of time!