Memory is a strange thing.

It is rather choosy in what it chooses to remember.

I know that, as a person who was born at the very end of the 1950s, SO many things have happened in my lifetime but most of my memories aren't of the BIG events, but lots of little, personal things. Making a snowman with my brothers when I was probably about 5, hanging upside down on the 'monkey bars' at school at about the same age. My first memories of moving to Africa with my family ... more on that another time.

As a person who has worked most of my life in the news business, I strangely find that I don't remember even many of the big life-changing events. Although I DO know where I was on September 11th 2001, when the planes hit the World Trade Centre in New York.

And I remember the events of February 11th 1990 because I clearly recall watching them on the television.

It was the day the world watched Nelson Mandela walk free from prison on Robben Island, in Table Bay off the coast of Cape Town in South Africa, after 27 years in captivity.

The crowds were incredible and then we saw him, holding hands with his then wife Winnie, walking through the crowds. Walking into Freedom.

It was incredible. It really felt like I was watching history in the making.

For my whole life I was aware of South Africa - I had relatives living there and had visited my brother and seen apartheid in action, even the reaction of some black people against members of their own community during these very turbulent times as they worked their way towards independence. I had witnessed terrible scenes on a television screen, an horrific 'necklace killing' which was shown on TV. If you don't know what this is, please click on the link... I can't bear to repeat it here. I still have the images in my mind.

One of the iconic songs of the era, 'Free Nelson Mandela', was a cry for freedom not just for the man, but also for the black population, the nation of South Africa. With the real threat of a racial civil war and pressure at home and internationally, including economic and sporting boycotts, eventually the government of President F. W. de Klerk saw what needed to be done.

And here Mandela was ... walking free. The man who had been imprisoned for sedition and conspiring to overthrow the state of South Africa was a free man. At last!

But what came next was even more astounding.

It would have been easy for Mr Mandela to insist on power for the black population, immediately, and to rouse them to action.

But instead, he worked with President de Klerk to negotiate an end to apartheid, that system of institutionalised racial segregation that had been formalised in 1948. Eventually there was a multiracial general election in 1994 which resulted in victory for Mandela and his party, the ANC - the African National Congress. Nelson Mandela became the first black president of his nation.

After assuming power, and especially after suffering 27 years in incarceration, one might have assumed that Mandela might then have wanted his revenge on the white politicians and civilians who had made life so unbearable for the black and 'coloured' population for so long. But no.

Instead he emphasised reconciliation between the country's racial groups and created the Truth and Reconciliation Commission to investigate past human rights abuses.

It was barely a year after that 1994 multi-racial election, which my own family members were pleased to be part of, that I visited South Africa again. Life in the country seemed familiar and it didn't feel like much had changed really, but there was hope in the air.

And although it is still a troubled country, with much poverty and even inequality of all kinds, today I remember the man who guided his country through such a momentous era, which could have turned out so differently. 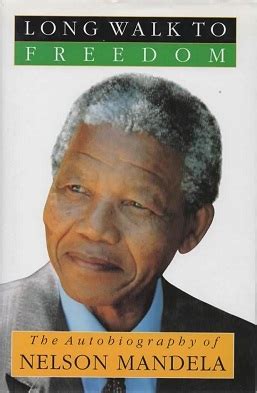 In his autobiography 'Long Walk to Freedom' (Little Brown & Co 1994) Nelson Mandela shared not just his life's story but also his wisdom.

“No one is born hating another person because of the colour of his skin, or his background, or his religion. People must learn to hate, and if they can learn to hate, they can be taught to love, for love comes more naturally to the human heart than its opposite.”

And he left us with thoughts which can inspire us all ...

“I am fundamentally an optimist. Whether that comes from nature or nurture, I cannot say. Part of being optimistic is keeping one's head pointed toward the sun, one's feet moving forward. There were many dark moments when my faith in humanity was sorely tested, but I would not and could not give myself up to despair. That way lays defeat and death.”