Epiphany - a bit of a revelation!

Today is officially the end of the Christmas season.

Yes, I’m aware that most of us think Christmas ends on Dec 25th, but in strictly theological terms, that’s the day it STARTS!

And the ’12 Days of Christmas’ then run until today – January 6th – which is also known as the Feast of the Epiphany.

This important holy day originates in Eastern Christianity and in fact today is Christmas Day in the Eastern Orthodox churches. It’s also called ‘Old Christmas Day’. In some countries  January 7th is also celebrated with a Christmas bank holiday.

Traditionally, today marks the moment when Jesus was made known to the world. If you think about it that’s where the word ‘epiphany'’ comes to us … not to get too technical but if you look up the word in the dictionary … it means ‘a moment of sudden and great revelation or realisation’. 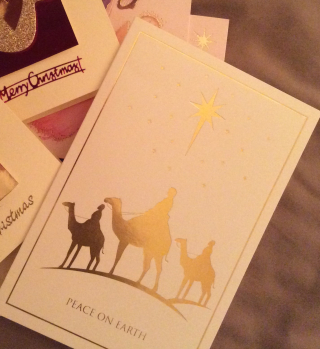 January 6th is the day when the Magi – the Wise Men/Kings – are thought to have visited baby Jesus, the Christ Child,  as related in the New Testament of the Bible in Matthew Ch 2: 1-12. Yes, I know, in the traditional Nativity we have them coming to the manger in the stable at the same time as the shepherds on the night of the baby’s birth, but this narrative tells us it might have been a bit after that.

But as those wise men (and by the way there’s nothing to tell us there were three of them – we just assume that because they brought three gifts … gold, frankincense and myrrh) represented the wider world outside of the place of his birth, the place we now call ‘The Holy Land’, it has become the time when we commemorate the ‘revelation’ or ‘appearance’ of Jesus Christ to the world, to the Gentiles or the non-Jewish populations of the world.

Another tradition also links Epiphany with the baptism of Jesus by John the Baptist, thirty odd years after his birth, just as he was about to start his ministry. This story is shared in Matthew 3:13-17; Mark 1:9-11 and Luke 3:21-22, with Christ revealing himself to the world as God's son. Some Christian denominations also celebrate Epiphany as the commemoration of Jesus' first miracle of turning water into wine at the Wedding at Cana (John 2:1-11), an event thought to show the divinity of Christ and his divine power.

To put it simply - today, Epiphany, is a day laden with significance.

Epiphany was introduced into Western Christianity in the 4th century and these days many churches also celebrate the festival on the Sunday before January 6th – it’s called ‘Epiphany Sunday’ and soon after there is ‘Plough Monday’ but that’s perhaps a story for another time.

There are many traditions which have developed down the centuries associated with Epiphany. Today is the day when it’s thought we should take down our Christmas tree and decorations.

So that’s one of my jobs for today then!

Posted at 08:00 AM in church, Daily Thoughts, Faith, History, Motivation, One Day at a Time, Religion, Weblogs, Writing | Permalink | Comments (1)

Very interesting Cathy, and good to remind ourselves of these things.