Beauty out of Chaos

When you were a kid did you ever get into Lego? Perhaps you still are?

I have adults friends and relatives who love a bit of Lego, and these days the constructions come in all themes and all shapes and sizes. From farmyards to Star Wars and Harry Potter's Hogwarts, these kits come with strict instructions, specialist bricks and other objects, which when carefully and meticulously put together, turn into something quite magical. If you want you can recreate the White House, or the Roman Coliseum, the London Sky Line ... all in Lego!

But today I'm not talking about these modern marvels. No, I'm thinking about those basic, simple plastic blocks in bright primary colours which I loved as a child. 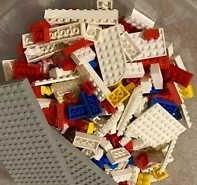 There was no order to it  ... usually the Lego bricks were kept in a box and then scattered on the floor. Like the kids of today, we then rifled through them to find what we wanted, making a lot of noise and grabbing what we needed to build that simple house, or car, or even people (before the days when Lego made plastic people) And of course, the best thing was, at the end of it all, we could smash it to pieces and the following day we could use the bricks again to make something new, confident in the knowledge that whatever Lego piece we chose, it would always connect with another.

It all seemed so simple, but of course, it wasn't. The development of the child's toy had not happened overnight.

By 1947 the company was developing plastic toys and in 1949 they began producing a new product, 'Automatic Binding Bricks'.  Other companies were also producing similar self-locking blocks, and Lego continued to refine and develop the ultimate 'locking' design, and to search for an outstandingly durable material from which to make their building blocks.

The rest, as they say, is history.

Back at the start of it all Christiansen had a motto -  "only the best is good enough". He encouraged his workers to never skimp on quality, always producing the best. That is still the Lego Group's motto today and it's stood the Danish company in good stead because Lego is now one of the most recognisable and valuable brands in the world. Not just all those building bricks and incredible kits for adult Lego connoisseurs, but even amusement parks. I've had a few fun days myself at Legoland in the town of Windsor in the UK!

Films, competitions, those theme parks dotted around the world - the Lego Group continues to develop it's brand and products, but I guess it's that iconic brick which we all remember. We certainly remember it when we unexpectedly step on one of them in bare feet !

But what I love about Lego is that the original concept and even the fancy kits today are all about IMAGINATION and creativity. And it's about perseverance ... if at first you don't succeed, try try again.

Out of the chaos of the multi-coloured masses of Lego pieces scattered on the floor in front of us can come order, so long as we have the determination to keep trying, re-thinking our design, and maybe use the bricks and blocks in a slightly different configuration.

There's something spiritual about that.

Out of the chaos of our lives can come order. With a motivation to do our best, some imagination, a good deal of determination and maybe a guide to help us from time to time, we can create something beautiful.

And if it doesn't happen the first, or even the umpteenth time, if we develop our skills, and talents and creativity and motivations, and use them again, and again perhaps in a slightly different way, we can begin to create that beauty in our lives which we have craved.

And - if we think beyond ourselves, the same can be true for our communities, our world. We just need to be committed to creating that beauty, determined not to give up, even if at the moment everything looks and feels so messy!

So - maybe it's time to start building!