Be the Light in the Darkness

It's a day when we remember those who suffered in the Holocaust - members of the Jewish race and culture, and others who were persecuted and murdered by the Nazi regime in the Second World War.

It's reckoned that between 1941 and 1945, across German-occupied Europe, the Nazis and their collaborators killed an estimated six million Jews. That was about two-thirds of the Jewish population who were living in Europe at the time. They were persecuted, held in ghettos, and then eventually, rounded up and taken to work/slave and concentration camps, as well as extermination camps where they were murdered, including being gassed to death in gas chambers in places like Auschwitz, Bełżec, Majdanek, Sobibór, Chełmno, and Treblinka in Poland,  which was under German occupation.

It was on January 27th 1945 that the Auschwitz concentration camp was liberated by forces from the Soviet Union, and so this is the day that was chosen for the commemoration of International Holocaust Remembrance Day and some other national Holocaust Memorial Days.

Since January 2001, this day has been an opportunity to remember all those who perished in this genocide and the millions who survived against the odds, but whose lives would always be lived in the shadow of those who were lost. It's estimated that the total number of people murdered during the Holocaust was 17million ... 6 million Jews and 11 million others who Nazi Germany discriminated against because of their religion, ethnicity, disability, political beliefs and sexual orientation.

Unfortunately, despite the appalling facts of the Holocaust, man's inhumanity to their fellow human beings has not halted, and so today is also a time  for us to remember those many millions of people who have perished in genocides since the mid 20th century, including in Cambodia, Rwanda, and Bosnia.

Here in Jersey there is always a Holocaust Memorial Day ceremony, which includes the laying of wreaths at a memorial, and commemorations of those who died at the hands of the Nazis. The Channel Islands, of which Jersey is a part, were the only places in the British Isles that were occupied by the Germans during the Second World War, and some of our residents were deported and died in those work and concentration camps, and some members of our community today, including my friends in the Jewish community, had family members who died in the Holocaust. 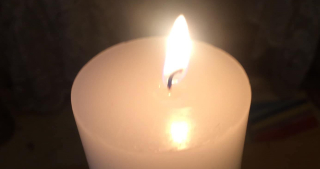 At 7pm today there will be an event organised by the Holocaust Memorial Trust, which will focus on that theme  - 'Be the Light in the Darkness'.

The theme, we are told on their page, encourages us all to reflect on not only the terrible depths to which humanity can sink, but also the incredible ways that communities and individuals resisted the darkness, and became 'lights' during and after the Holocaust.

Please click on the link above to read more about that theme and how we are being called to be 'lights' in the 'darkness', and how we can stand in solidarity with those who were and still are affected by persecution.

We are encouraged, among other things, to help shine a light on situations where people are persecuted, to fight prejudice, intolerance and discrimination when we see it,  and to stand firm to confront misinformation, distortion of history and the denial of the Holocaust which is still unfortunately prevalent.

So I'm encouraged today to be a Light in the Darkness and am inspired by those who have gone before.

Posted by Cathy Le Feuvre at 08:00 AM in Current Affairs, Daily Thoughts, Faith, History, inspiration, On This Day, One Day at a Time, quotes, Weblogs, Writing | Permalink | Comments (0)