But once upon a time, even before the invention of the telephone, if people wanted to contact their business contacts, friends, or family when they were apart, the best way was to write a letter.

I love letters. I love handling them, thinking of the person who has taken the time to pick up a pen and write down their thoughts.  Cards also work for me and it’s about this time of year we file away or recycle last year’s Christmas cards.

The letters people have written to each other in the past are also accounts of history, of facts and feelings handed down to us from people who have long since departed our world.

A few years back I even wrote a book based on the love letters exchanged over nearly 40 years in the 19th century between the founders of The Salvation Army - William and Catherine Booth. I have to say, reading their letters, which are held in the British Library in London, and writing 'William and Catherine' not only helped me to understand their personalities and motivations in life, but also to get an insight into their deep Christian faith and how that helped to create what is now a global church and charity movement!

But back to the point of today's 'thought'.

It was on January 10th 1840 that the Penny Post was introduced in Great Britain. This meant that mail was delivered at a standard charge. Until that point every letter was paid for individually by the recipient and it was a cumbersome system.  It was at the end of the 1830s that a chap called Rowland Hill published a pamphlet entitled ‘Post Office Reform’, which proposed a uniform postage rate of one penny, wherever in the country the letter was posted or received.  To prevent postage fraud, he came up with the idea of an adhesive label to pre-pay the postage. So the postage stamp was born.

The 'Penny Black' was that first ever stamp and its inventor was eventually knighted by Queen Victoria and became SIR Rowland Hill. 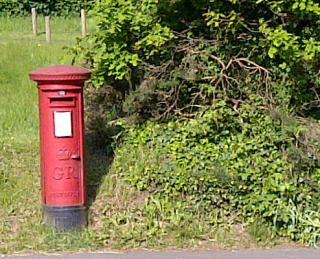 Today we can still find old red postage boxes dotted about, and whenever I spot one it draws me right back into history. It's a link with the past!

Not so many people use ‘snail mail’ today, but every time we place a postage stamp on an envelope perhaps we can think again of those who have left  their impact on the world through letters.

In the New Testament we hear accounts of the life of Jesus Christ, and the early church through epistles, or letters.  Letters which contain wisdom which is as true today as when it was conceived and written down a couple of thousand years ago.

Like St Paul’s words to the early church in Corinth - ‘And now these three remain: faith, hope and love. But the greatest of these is love!’ (1Corinthians 13:13)

If that’s not a great blast from the past handed down to us in a letter, what is?